After D&D stepped forward - declaring, incidentally, they were ending their crop circle making for good - they actually did then make some recognisable formations, generally in connection with John Macnish, who worked with them and helped them present their case.

It is understood that from 1992, they would prepare drawings for him and then (so the story goes) venture out and make the circles - thereby proving they were constructing the very formations being found out in the fields. In Macnish's book, he mentions how Bower would provide him with paintings of crop circles, and we read on page 113, "One rather dull Sunday morning in mid April 1992, a plain brown envelope dropped through my letter box. Its contents were far from dull, inside painted on a piece of art board was a water-colour of a circle design..." and on page 117, "Over the next few weeks my collection of water-colours grew as the cereal killers carved out two, sometimes three formations per week."

It seems from this that Bower was giving Macnish a succession of unsolicited paintings of crop circles. What very odd behaviour! It demonstrates, if nothing else, the value Bower placed on these illustrations as "proof" of his hoaxing activities. (Incidentally, there are no UK postal deliveries on Sundays, so if Macnish's recollections are accurate, Bower - or someone - was discretely hand-delivering envelopes through his door.)

These diagrams are curious, but of much less relevance to our story, since we know (or believe) that D&D did make the corresponding formations in these cases - although there are still some which have question marks...

Some of these are not worthy of our comments. But note how unimpressive, unbalanced and messy the actual formations are, as compared to the ones from before this point.

1991 Insectogram made for TODAY newspaper 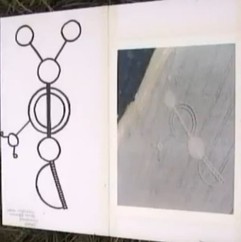 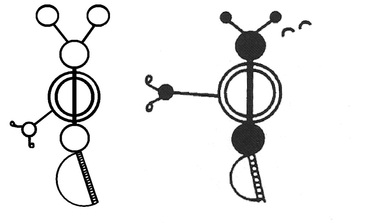 Again Bower has made the error of thinking that the two uppermost circles were almost the same size as the main circles. None of the 1991 insectograms had proportions anything like this; they always had rather small circles at the termination of the "feelers" – doesn't Bower know this? He claims to have made all the formations, including this one! Tellingly, when D&D came forward in September 1991, none of the insectogram formations had yet appeared in any books, and magazine coverage was scant. Bower had probably never seen more than one or two aerial photos of an insectogram and probably didn't know that the relative size of these two terminal discs appeared to be roughly consistent in all of them. 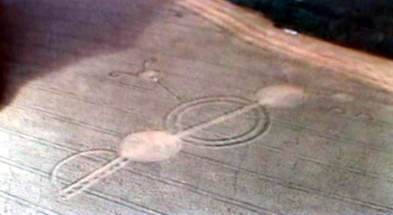 Here is some proof that Bower has done after-the-fact tinkering with his 'evidence' - the same drawing was shown on-screen in 1994 (on Arthur C Clarke's Mysterious Universe) - eight years before the version above. Note how it only has a single ring in the centre, and no pathway branching off to the side! He subsequently modified it to try and make it match an actual formation.

1991 Demonstration formation for the media

As readers will probably realise, this is the formation D&D made for the cameras when the original Today story broke. It was widely seen as a complete mess! I do not know for sure that the diagram above was the working diagram the two were using, but that's how it was presented in the footage shown in the Coast to Coast feature on the evening of 9 September 1991 (and since it was no later than that, and there is no earlier footage of the two known, it is a fair assumption to make). Needless to say, whether or not D&D were truly trying to make this insectogram-type design, their actual efforts were extremely disappointing, as shown in the video still above.

The above is an inferior re-creation of the quartered rings design from 1990 (see previous page). The image above left is a letter apparently sent to John Macnish, detailing where this little messy formation was going to appear.

Given the altogether wrong proportions in the drawing, which is how one might have pictured it when walking around at ground level, it's possible D&D did not really make this one. Again, they don't appear to understand the anatomy of the formation. The comment, "amount of grapeshot not accurate, or position" is also consistent with this being a drawing of something already in the field.

Above. left, with their names emblazoned on it, an out-of-scale diagram of what they call a "Penny Farthing 'Gram". The diagram to the right is from cropcirclecenter.com, and is presumably an accurate representation of how the formation actually appeared. Again, D&D seem to have sketched what they thought it would have looked like, having never yet seen a proper photo.

This formation was made by D&D, with input from crop circle film-maker, John Macnish. It is covered at length in Macnish's book, Crop Circle Apocalypse where, on page 156, the author explains how he had the duo incorporate a so-called "Indalo" figure into it, with the intent of impressing researcher Michael Green, who had a known interest in such things. He seems to have provided a sketch of the Indalo for Bower (who had never heard of it) to work with in the field, and in the event, it was successfully added to the design. It takes the form of a stick-man, with an arc over the top of his head.

Below we see a typical representation of the Indalo, then the figure as scribed in the field, and finally, detail of the same from Bower's painting above:

Bower's terrible representation of the Indalo is rather revealing. This particular painting has other poor details - look at the relative size of the centre ring, for example - suggesting that Bower didn't appreciate how very small it was in the real formation.

Above left, a cartoon by Bower (the lighting in scan makes it look like it was in two parts, but it's actually all on one sheet, as shown). Above right, the formation. He has it wrong again, as in the drawing for the bigger East Meon formation - and this time, it's wrong in the field too.

This extraordinarily complex pictogram design appears in a couple of photos of D&D. I know of nothing like it in the fields. In fact, it's hideous! This colour image was taken when the painting was displayed in 1993 at Marlborough, and there is a note resting on top of it, which reads, "Design for a 'giant' which never came". This is odd indeed - on more than one occasion, Bower produced this illustration of a formation which only existed in his imagination, and never in a field - as if it were evidence that he was making all the actual circles!

This last image looks like the famed Swastika of 1989 (see above). However, it is more akin to the circle which Bower made for the cameras in 1998 (shown here), as part of the Countryfile programme. Although clearly based on the earlier formation, this later one was different in that it had a proportionately smaller central circle, and note – the opposing quadrants align with one another, as in Bower's new diagram. In the 1989 Swastika, they has been offset, a feature which gave the circle its name. (The later version has the appearance of slight offsetting, but so does the sketch. It's an optical illusion.)

Bower's diagram doesn't properly represent either of the actual circles. See how he has included an outer ring in the drawing, which was present in neither. We know that Bower made a mess of this demonstration, getting the sizing wrong and needing help from others to get it finished. (His other prominent filmed demonstration was also a failure – see above – which is curious for such an experienced circle maker.) What can we say of it? Just that, once more, it doesn't match any real circle.

Bower seemed to like sketching the swastika design (easy to draw?). These circa 1992 diagrams show further examples - it's not clear if there was anything corresponding in the fields at the time... 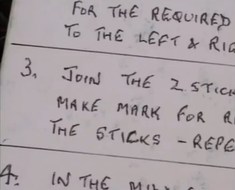 This last one isn't a diagram at all, but I include it for interest. It is a list of written instructions on how to construct a complex formation, which Bower was seen holding in a piece of film footage from 1998. There's nothing immediately wrong with this except that Bower has never actually mentioned the use of instructions like this. So why produce it in front of the cameras? Presumably he'd never needed written instructions when making literally hundreds of circles previously.

< BACK TO SECTION 2 - Evidence
Proudly powered by Weebly