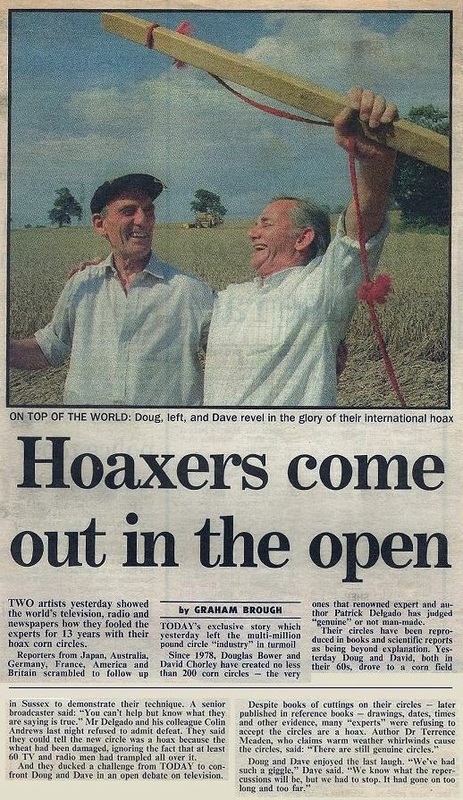 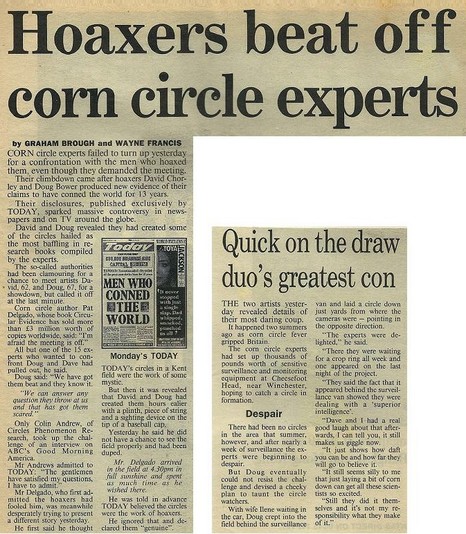 
Hoaxers come out in the open

Two artists yesterday showed the world’s television, radio and newspapers how they fooled the experts for 13 years with their hoax corn circles.

Since 1978, Douglas Bower and David Chorley have created no less than 200 corn circles – the very ones that renowned expert and author Patrick Delgado has judged “genuine” or not man-made.

Their circles have been reproduced in books and scientific reports as being beyond explanation. Yesterday Doug and David, both in their 60s, drove to a corn field in Sussex to demonstrate their technique. A senior broadcaster said: “You can’t help but know what they are saying is true.” Mr Delgado and his colleague Colin Andrews last night refused to admit defeat. They said they could tell the new circle was a hoax because the wheat had been damaged, ignoring the fact that at least 60 TV and radio men had trampled all over it.

And they ducked a challenge from TODAY to confront Doug and Dave in an open debate on television.

Despite books of cuttings on their circles – later published in reference books – drawings, dates, times and other evidence, many “experts” were refusing to accept the circles are a hoax. Author Dr Terrence [sic] Meaden, who claims warm weather whirlwinds cause the circles, said: “There are still genuine circles.”

Doug and Dave enjoyed the last laugh. “We’ve had such a giggle,” Dave said. “We know what the repercussions will be, but we had to stop. It had gone on too long and too far.”

CORN circle experts failed to turn up yesterday for a confrontation with the men who hoaxed them, even though they demanded the meeting.

Their climbdown came after hoaxers David Chorley ad Doug Bower produced new evidence of their claims to have conned the world for 13 years.

Their disclosures, published exclusively by TODAY, sparked more controversy in newspapers and on TV around the globe.

David and Doug revealed they had created some of the circles hailed as the most baffling in research books compiled by the experts.

The so-called authorities had been clamouring for a chance to meet artists David, 62, and Doug, 67, for a showdown, but called it off at the last minute.

Corn circle author Pat Delgado, whose book Circular Evidence has sold more than £3 million worth of copies worldwide, said: “I’m afraid the meeting is off.”

All but one of the 15 experts who wanted to confront Doug and Dave had pulled out, he said.

Doug said: “We have got them beat and they know it.

“We can answer any question they throw at us and that has got them scared.”

Only Colin Andrew [sic], of Circles Phenomenon Research, took up the challenge of an interview on ABC’s Good Morning America.

Mr Andrews admitted to TODAY: “The gentlemen have satisfied by questions, I have to admit.”

Mr Delgado, who first admitted the hoaxers had fooled him, was meanwhile desperately trying to present a different story yesterday.

He first said he thought TODAY’s circles in a Kent field were the work of some mystic.

But then it was revealed that David and Doug had created them hours earlier with a plinth, piece of string and a sighting device on the tip of a baseball cap.

Yesterday he said he did not have a chance to see the field properly and had been duped.

Mr. Delgado arrived in the field at 4.30pm in full sunshine and spent as much time as he wished there.

He was told in advance TODAY believed the circles were the work of hoaxers.

He ignored that and declared them “genuine”.

THE two artists yesterday revealed more details of their most daring coup.

The corn circle experts had set up thousands of pounds worth of sensitive surveillance equipment at Cheesefoot Head, near Winchester, hoping to catch a circle in formation.

There had been no circles in the area that summer, however, and after nearly a week of surveillance the experts were beginning to despair.

But Doug eventually could not resist the challenge and devised a cheeky plan to taunt the circle watchers.

With wife Ilene waiting in the car, Doug crept into the field behind the surveillance van and laid a circle down just yards from where the cameras were – pointing in the opposite direction.

“The experts were delighted,” he said.

“There they were waiting for a crop ring all week and one appeared on the last night of the project.

“They said the fact that it appeared behind the surveillance van showed they were dealing with a ‘superior intelligence’.

“Dave and I had a real good laugh about that afterwards, I can tell you, it still makes us giggle now.

“It just shows how daft you can be and how far they will go to believe it.

“It still seems silly to me that just laying a bit of corn down can get all these scientists so excited.

“Still they did it themselves and it’s not my responsibility what they make of it.”