To understand the crop circle phenomenon as it was perceived in 1991, we need to look at the book Circular Evidence (1989), which apart from being by far the most widely read document on the subject, consisted of a sequence of case studies. Not many readers would be privy to alternative information on the subject at that stage, and so for better or for worse, Circular Evidence came to define the recent history of the phenomenon. Of course we now know that the apparent chronology was illusory, and that many more circles have appeared before and during the book's coverage, which upset the sequence - but let's see what picture of the circles' development emerges from the book - and let's also read Doug Bower's version of crop circle history, and see how the two coincide:

It is pretty clear from these various statements that D&D are telling the story in parallel with the apparent chronology in Circular Evidence. They claim the first ever circle in 1978, exactly as per the book, followed by circles at Cheesefoot Head in 1981, then the development of quintuplets and ringed circles, culminating in the formation on the book cover, which appeared in 1988. (We don't have a direct quote from Bower on this formation since, following his encounter with Colin Andrews described above, he disowned it.) Almost all the key formations in the book have been claimed by D&D, including everything prior to 1987.

It is interesting from an historical point of view to sequence the book's coverage:

The impression we get is what led Ralph Noyes to observe: “A development is in train” (The Crop Circle Enigma, Noyes, p.30). He went on to cite specific cases where evolution was thought to be in play: "Are we to blame the hard-pressed, over-worked observers for having inadvertently created that strong appearance of 'designed development'?" (p.31).

This perception of an ordered development was widely acknowledged, even by those who believed it to be illusory. For example, Paul Fuller recognised the issue Noyes was speaking of, arguing that, “it seems almost certain that media bias… resulted in the apparent evolving of formation types and as a result we are satisfied that the evolving of formations does not represent a true characteristic of the phenomenon” (Fortean Times issue 53, p35).

The question to be addressed is whether the 'designed development' we see in the above sequence represents a true history of the circles. It is clear that D&D's version tallies with Circular Evidence, but does it fit the known facts?

We could go over the history of every design type and see when it was first recorded. As it happens, the historical data varies widely in terms of reliability and we cannot be certain of the details on record for every case prior to 1978. But a cursory look at the book The Secret History of Crop Circles reveals the following tentative cases:


We also have evidence of meaningful groupings such as triangular triplets, straight-line pathways and even triangles prior to 1978. It is not possible to examine the history of all these designs in depth, due to a lack of substantial data, but there is one design type in particular which we can trace a history to:

History of the quintuplet

This design type supposedly arrived in 1983, but if we could date this design to before 1981, the timeline and ordered development above would come undone – there would be no logical progression from single circles to triplets, quintuplets and ultimately the Celtic Cross - but what information do we have on the quintuplet?

In 1992, Paul Fuller published a database of "crop-formed spiral circles" from the records of the organisations CERES and BUFORA (see Crop Watcher issue 14). It included the following: "1950s, Heytesbury region, Wiltshire, singles and quintuplet". Of course this is not much to go on, but is the earliest evidence of quintuplets long before D&D.

When we read Circular Evidence more closely, we find more accounts. One is outlined on page 181, concerning a case from 1977: "There were five perfect circles in the dice-dot pattern, with a centre circle six metres in diameter. The other four, symmetrically square and equidistant from it, were one metre in diameter." 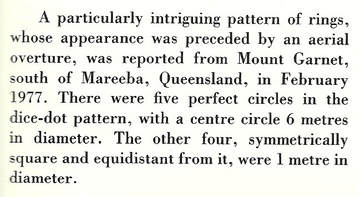 Also in Andrews and Delgado's book, the very first case study in 1978, which looks from the photo like a plain circle, was in fact a quintuplet! The description states, "[The farmer] noticed four smaller circles nearby. They appeared to be regularly spaced around the large central circle. The formation looked like the five dots found on a dice." 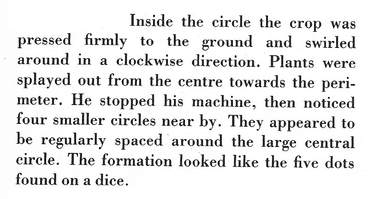 Another very interesting case is from 1980 – incredibly, those Westbury circles which D&D claim to have made. In the book Crop Circles: A Mystery Solved (p17) by Paul Fuller and Jenny Randles, we read: "It was later found by examination of the best aerial shots of the 1980 circles at the same spot, as taken by Now! magazine, these too had feint outer satellites. There were only three of them, not four as in the new 1983 formation, but the fourth one would have been precisely where a hedgerow sat."

This latest account is a major discovery! D&D never once mentioned creating satellite circles at Westbury in 1980.

Here’s one of the images: 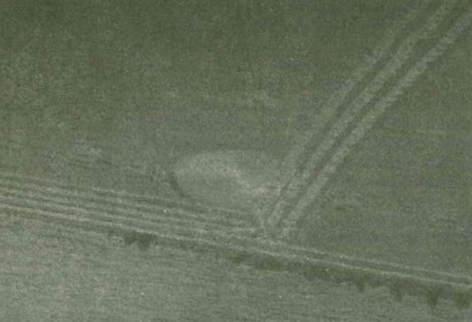 At first, the satellite circles appear irregularly spaced, throwing doubt on whether this actually is a quintuplet. However. Overlayng some guidelines reveals they are much more regular than they first appear. 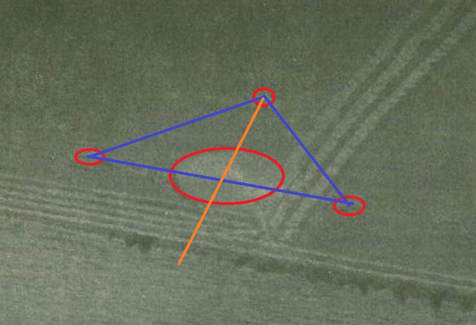 Is this just a trick of the light, or chance crop damage which just happens to look like a quintuplet? Not according to one of D&D's most vocal supporters in the 1990s, John Macnish. He fully accepts this as fact, remarking uncritically on page 227 of his book, Crop Circle Apocalypse, "Aerial shots of the site reveal the presence of three 'satellite' circles."

On the previous page, Macnish comes out another minor gem. In discussing the 1978 formation mentioned above, which Bower seemed to think was a plain single circle, he says: "[The farmer] describes a quintuplet which is exactly what they [D&D] claim they made".

So what the record actually shows is that quintuplets may well have appeared at least in the 1950s, 1977, 1978 and 1980, all before Bower claims they were "born" in 1983, to challenge Dr. Meaden. There is good testimony from the farmer of the 1978 case, and photographs of the 1980 one. Macnish has even been forced to incorporate this into his version of the D&D story.

But Bower has not. In fact, his account of the introduction of the quintuplet is untenable, and the accepted existence of earlier examples breaks apart the illusory sequencing in Circular Evidence, with which his chronology tediously agrees. So, Bower’s version of events is once again shown to be an invention.
ON TO PART 3.4 - We were not alone >